GRAPHIC WARNING: (THESE IMAGES ARE NOT FOR THE FAINT OF HEART) The photos below are extremely disturbing, much like this drug. 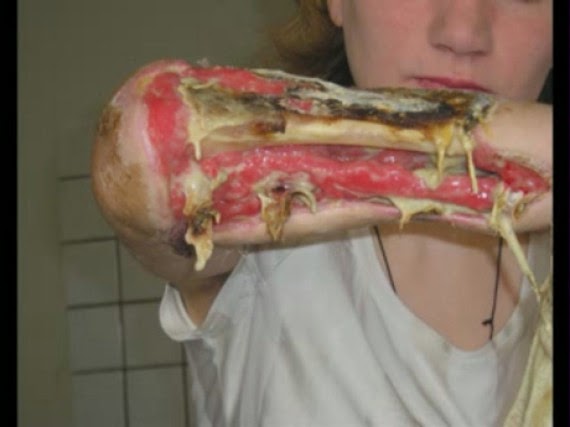 Desomorphine (dihydrodesoxymorphine, Permonid, street name krokodil) is a derivative from morphine (an opioid) with powerful, fast-acting sedative and analgesic effects. Patented in 1932, it is around 8–10 times more potent than morphine. It was used in Switzerland under the brand name Permonid and was described as having a fast onset and a short duration of action, with relatively little nausea or respiratory depression compared to equivalent doses of morphine.

Krokodil: A great drug to use if you want a grossly realistic costume for Halloween -- and then to die.
The extremely dangerous drug that is three times more addictive than heroin has finally made its way from Russia to the United States, with two cases being reported in Arizona this week. Essentially krokodil does this to your flesh...
HOW DOES IT HAPPEN?

-Krokodil is a homemade concoction of codeine and hydrocarbons that is injected into the veins.
-Since it is homemade, rudimentary mixers like gasoline and hydrochloric acid are used.
-Without a krokodil Heisenberg, the drug is often extremely impure and retains traces of the acid and gasoline. So users are pretty much injecting gasoline and acid into their veins, which is why it can cause skin to become disfigured and rot off the bone.
-The name  krokodilis used because it can make your skin look like that of a green or even purple, scaly
crocodile. 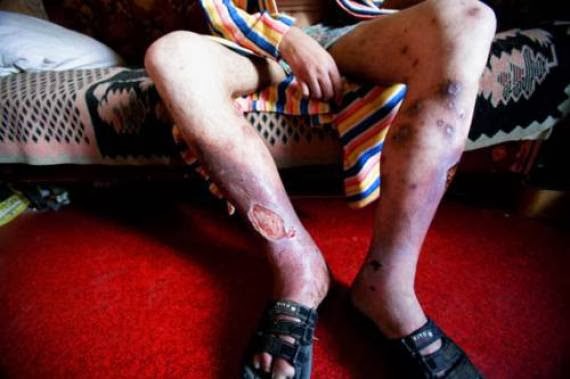 According to a report on TIME MAGAZINE, Dany Thekkemuriyil and Unnikrishnan Pillai, both physicians at SSM St.Mary’s Health Center in Richmond Heights, Mo., reported treating a patient in their emergency room in December 2012. The 30-year-old man revealed thighs where skin was rotting away and a hand with a missing finger, telling the doctors that he had been injecting himself with the synthesized version of heroin made from a cocktail of codeine, gasoline and several other chemicals. He said he had been using the designer drug eight months before seeking treatment.

“We saw that his finger fell off and we saw a severe looking ulcer and sores on his thigh and it did really fit the picture of Krokodil,” Thekkemuriyil told KTVI-TV in St. Louis. He and Pillai submitted their findings to the American Journal of Medicine in February, further closing the window on speculation over the arrival of the drug from Russia, where it is an epidemic.  “Our case is the first case that’s been published in a recognized medical journal.”